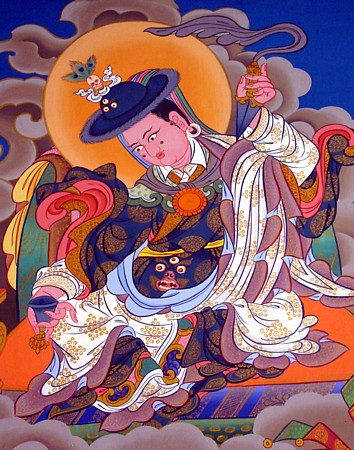 Nubchen Sangye Yeshe was born in the 8th century into the Nub clan in the Drak Valley. His father was Selwa Wangchuk and his mother was Chimo Tashi Tso. He began his training at the age of seven and became a master of the Tantras. His consort was Rigzin Chosdron.

He was one of the twenty-five main disciples of Padmasmabhava including being Padmasambhava’s heart student. He received numerous initiations from Padmasambhava including “The Sadhana Practices of the Eight Herukas”. In this initiation ceremony he had a special connection with Yamantaka, the wrathful aspect of Manjushri, the Great Bodhisattva of Wisdom.

After practicing this sadhana for a short time, he received a vision of Yamantaka. Manjushri also directly bestowed blessings on him. He had many visions and teachings in this way.
During his life he practiced extensively in caves and hermitages in Tibet, Nepal and India. He met and received teachings from Sri Simha, Vimalamitra and Kamalasila

Nubchen Sangye Yeshe became the founder and head or king of the White Robe Sangha of Ngakpas, the lay Tantric practitioners. Due to Nubchen Sangye Yeshe’s accomplishments as a tantric practitioner, he was able to prevent the tantric teachings from being destroyed in Tibet in the 9th century. This Tantric order in the Nyingma Buddhist tradition continues as his lineage to this day.

Nubchen Sangye Yeshe wrote important texts including “Armor Against Darkness”, a major commentary on “The Six Tantras Clarifying the Six Limits”. He was also the author of “Samten Migdron” – “The Lamp for the Eye in Contemplation”. The latter outlines the meditation systems in early Tibet. It includes a clear discussion of Dzogchen.

Among his principle disciples were Pagor Longchen Pakpa, Dru Legpai Dronma, Ngen Yonten Chok and So Yeshe Wangchuk. It is reported that Nubchen Sangye Yeshe lived for more than one hundred years.