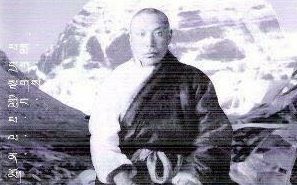 I will write three chapters of his body, speech and mind history.

Body History:
First, H.H. Rigdzin Padma Dragngag Lingpa is a father lineage, Ahchak Dri lineage. He was a hero of a great lineage and he came from great lineages, Drilhagayl clean bone lineage. This is found in three states. Padma Dragngag Lingpa’s father’s name was Tathog Rinchel Gonpo. His previous life was Manjushri/ Yamentaka, and his name was Shanmarpo. He was very careful of karma and he always loved Dharma. He was knowledgeable in 64 Indian arts. He came from a very kind lineage and everyone knew his great yogi father. His mother was Ahkyong. She was the great king’s daughter and her name was Rigshed Dolma. Rigshed Dolma’s son was born in the Tibetan calendar 15 6 Water Dog year. In the English calendar, 1 May, 1922. He was Padmasambhava’s Heart Son and the manifestation of Nubchen Sangye Yeshe. After King Gesar’s time, his nephew, whose name was King of Dralha Tsegayl, godson of Dralha Tsegayl.

Throughout time and many incarnations of Tertons’ knowledge and being a yogi, to immeasurably help Buddhism and sentient beings, all this came in the manifestation of Terton Padma Dragngag Lingpa; outer, inner, and secret auspicious youthful golden face, came to this world.

Padma Dragngag Lingpa grew very, very quickly. He naturally remembered his previous lives. He saw Buddhas, Bodhisattvas, gods, Nagas and humans. He saw everything. He knew other peoples’ mind. He did a lot of magic like placing his foot prints in rock and many other things.

Speech History:
In 1929, when Padma Dragnagag Lingpa was 7 years old, it was easy for him to understand the Tibetan alphabet, writing and reading. He studied sadhanas and did different activities. Everything was easy for him to understand. He went to the river, the forest and the mountains where he did Guru Rinpoche meditation daily for many years. He was a great meditation master even though he was very young. People called him Gomchen, which ‘means great meditation master’.

In 1937 when Padma Dragngag Lingpa was 15 years old, when secondary advantagious factors arose and with renunciation, he went to Nymingma Dharma University and Dodrub Gar. After three years of studying hard and practice, he graduated. This was much faster than most people finished. He studied sutra, tantra and other knowledges.

In 1939 at 17 years old, his Root Guru, Apang Terchen Rigdzin Ogen Trinley Lingpa taught him sutra; outer, inner, and secret empowerments; transmission, outer teachings, and the Great Perfection. He gave everything to Padma Dragngag Lingpa like completely pouring water from one vase into another vase. Padma Dragngag Lingpa listened carefully and did meditation to realize everything.

In 1945, when Padma Dragngag was 23 years old, Kyentse Choskye Lodro a Bhikkhu, a great monk, gave him many Dharmas, advice, and heart meditation. With great activity, he marvelously benefitted others.

In 1947, he was 25 years old, when H.H.Jamyang Kyentse Dorjee Chang recognized him as Nubchen Sangye Yeshe’s incarnation and great Guru Rinpoche, Padmasambhava’s Heart Son. He saw Treasures coming from his mind and that he would know everything. With this, Padma Dragngag Lingpa became a yogi and was no longer a monk. Jamyang Kyentse Dorjee Chang instructed him to do a yogi lineage because he is a Treasure Master. His secret name was Padma Rangdrol Tsar. His Terton Treasure Master name was Padma Dragngag Lingpa.

H.H.Jamyang Kyentse Dorjee did a long life prayer for him. His prayer is Amaho Rigdzin Odyana. He was the image of Guru Rinpoche in manifestation and he can open all the Ocean of Treasures. These are his Heart activities. To this great Bodhisattva, Padma Dragngag Lingpa, I pray. Jamyang Kyentse Dorjee offered mandalas of body, speech and mind to Padma Dragngag Lingpa.

H.H. Khyentse Rinpoche and his brother, Nangzed Drupi Dorjee who was H.H. Shechen Ramjam Rinpoche 6th along with their organization were with Padma Dragngag Lingpa. Also, his two Dakinis were with him. First is Ta Jigme Paldron incarnation of Shakya Dewa. Second is Ling Jigme Chosdron who was also called Garwang Palmo was an incarnation of Mandarva White Ling lineage. Princess Jigme Chosdron was the daughter of Sotse Jongnye.

Padma Dragngag Lingpa did consort practice especially with Rigma Mandarava incarnation and all the Treasures opened easily. In the beginning, Khyentse Rinpoche and Shechen Ramjam Rinpoche together with dakini and 300 people, saw the Treasure in the sky. It was Guru Rinpoche Long Life vows and it looked like a shell full of relics. Padma Dragngag took this from the sky and offered it to Khyentse Rinpoche.

We have Padma Dragngag Lingpa’s Treasures now because everything was at Khyentse Rinpoche’s home. He looked after the Treasures as well as Manjushri and Sarasvati statues, Yeshe Tsogyal’s necklace, dakini letters, King Gesar’s Heart Rock and medicine Ahru Namgyal. And also, body, speech, mind, and a lot of Treasures. Because Khyentse Rinpoche looked after everything carefully, we still have Padma Dragngag Lingpa’s Treasures and other writings in his own hand writing.

The Sadhanas in the ‘Thuk’ or Yidam division include: 13 Guru Rinpoche Wishfulfilling Gem sadhanas and Guru Rinpoche’s history which is like Padma Kathang, and Outer, Inner, Secret Guru Rinpoche prayer. There is also King Gesar’s history with meditation.

Padma Dragngag Lingpa taught in Shachen Monastery and Kyenpo Monastery. He carefully taught Preliminary Practice, Yeshe Lama, Tsalong, Trechod, and Thodgal to his heart student Konchok Zangpo Khentul Ahglyuyur Rinpoche, Lama Samten and Lama Lhomo, Khenpo Gayltso and other students. Their action was doing meditation together with him in many retreats.

In 1958, Padma Dragngag Lingpa gave his last teaching of the Nine Yanas: Hinayana to Dzogchen.

In 1959, he knew China was coming and also that he couldn’t do anything to prevent it. He gave his secret teachings to his dakinis. He gave his Dzogchen students pointing out instructions and all of his teachings. He said he was going to Guru Rinpoche at Copper Mountain and there we would see each other together.

After this, his physical body disappeared and no one knows what happened…..